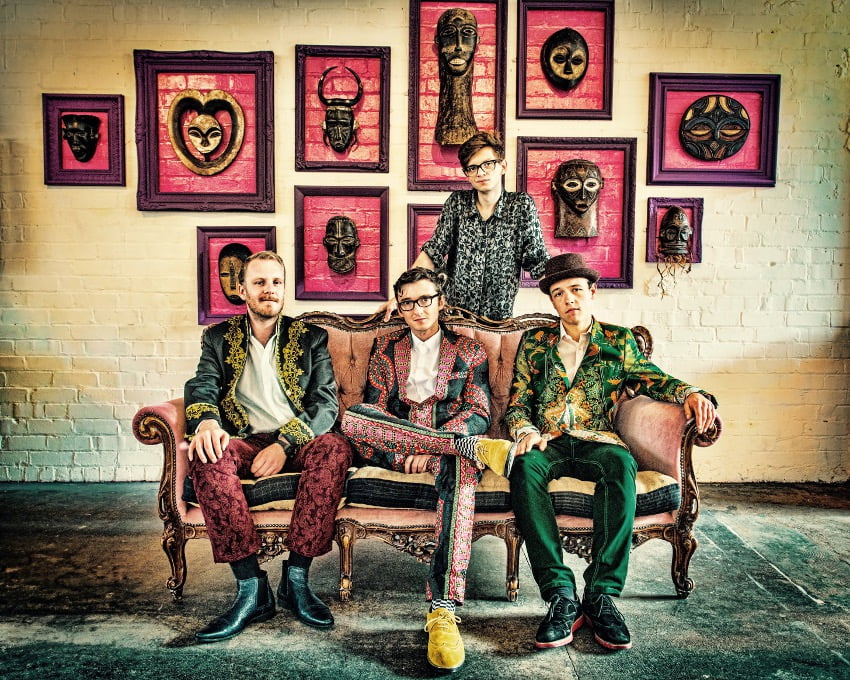 Maia are a pop folk acoustic quartet from Leeds, who have described themselves as sci-fi folk evangelists! They have a radiant varied sound, stunning harmonies with a brooding sense of adventure and streaks of pop eccentricity.

After 3 years of live show experience, and supports including the likes of Anais Mitchell, The Low Anthem and The Unthanks the group are continuing to receive huge praise and a greater following for their fantastic live shows. In 2012 and 2013 their festival appearances have included:

Their highly acclaimed celestial album “Pepper Stars” released in October 2012 received many 4 and 5 star reviews and was a Time Out Album of the week. The band were well supported on the radio regionally and nationally from Guy Garvey and Tom Robinson on BBC 6 music as well as being picked for Best of 2012 on Radio 4s Loose Ends Culture Show.

2014 will see the release of their first new 4 track EP “Finite World” on record store day (19th April) with several more singles and an album to follow.

“Maia produced one of the best and most talked about performances on the main stage from the pin drop silence during one of their more tender moments to their rousing finale of which got them the biggest standing ovation of the weekend……truly mesmerising!” – Jim McLaughlin Festival Director Musicport 2013

‘This exciting and innovative band wowed the audiences at Broadstairs Folk Week with their interesting and eclectic take on folk music.  Well written songs, great musicianship and some of the nicest guys around make this young band a must have booking for any festival organiser’ – Kim Headley Artistic director at Broadstairs Festival 2013

“Maia have undeniable chemistry on stage, they are mesmerising to watch both visually and musically” – Hop Farm Festival 2012

“Eclectic with surprising twists and turns throughout their set, Maia are very good atexecuting their own brand of whimsical folk. Upbeat and multi-instrumental, they set the right mood in the glade as feet tap and heads turn.” – Acoustic Magazine (In The Woods Festival) 2012

“A “sci-fi folk” group from Huddersfield known as Maia, who were received with much excitement and warmth spend 45 minutes charming the audience and making sure the effort of finding them was worth it.” – The Times (Cambridge Folk Festival) 2011

“..This has enough elements of folk for genre fans but covers an awful lot of ground and is one of the more compelling listens I have had in a while.” – Folk world 2012

“..The sheer breadth of the band’s vision is breathtaking.” – Stirrings

“…The gentle melodies and skilled musicianship provide plenty of rewards.” – 8/10 The Ark June

“Refreshingly, Maia also prove that the outer reaches of space can still act as a source of lyrical and musical inspiration, without resulting in revolving doors, glitter suits and wanky guitar solos” – For Folk’s Sake

“Maia have, wonderfully, unmistakeably, created something all of their own. “ – Music OMH

Eclectic with surprising twists and turns…Maia are very good at executing their own brand of whimsical folk.” – Acoustic Magazine

“Much more than just another acoustic, folk band, Maia are cut from a different cloth.” – Michael Rowland, This is a Popscene

“This is a band that is forging its own furrow and it is a mighty broad one at that, embodying a depth of musical ‘nous’ and a spirit of adventure that is sorely missing from a million and one copycats in the music scene.” –  Iain P W Robertston