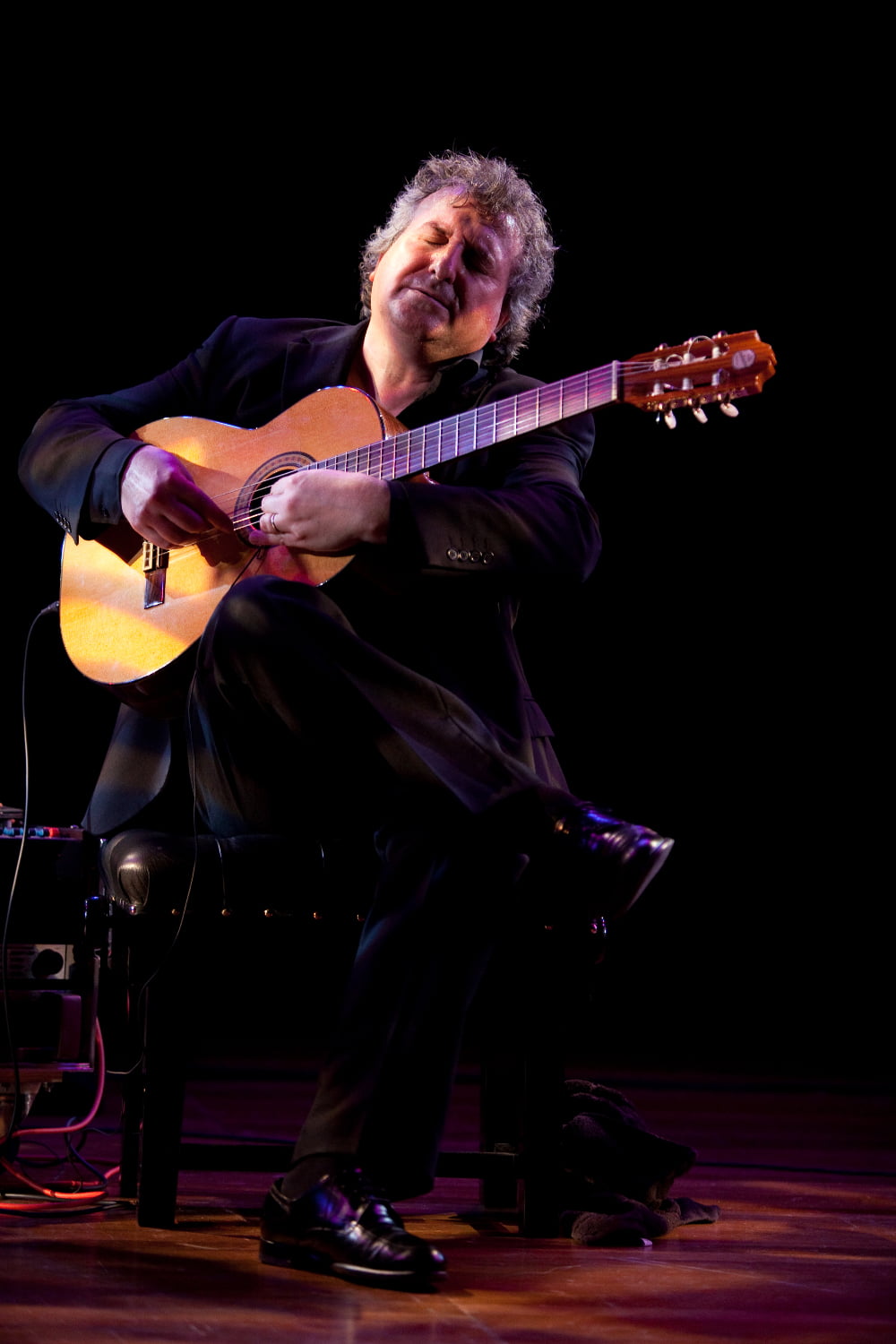 Hailed by the Guardian for his “exquisite guitar playing”, the formidable virtuoso guitarist Eduardo Niebla will present his amazing repertoire of “stunning flamenco jazz” with his internationally acclaimed guitar duo. A master of today’s generation Eduardo has traversed the worlds of jazz, classical, world and pop music, collaborating with such diverse partners as Craig David, Juno Reactor, sitar maestro Nishat Khan, Lol Coxhill (sax) and the Dante String Quartet.

Expect a spellbinding evening of passion, verve and fleet fingered virtuosity from one of the most potent forces in flamenco jazz fusion: “poignantly poetic… and truly breathtaking” (SCOTSMAN)

“Eduardo – virtuoso? Inventive improviser? Yes and yes. And creative composer too. Writer of beautiful melodies, great grooves … He cast a deep, engrossing spell over the audience which transported them to other places, to the distant past, to India, Arabia, North Africa, Spain – tracing the link between modern Flamenco and the ancient music of India. And then on to the New World, to South and Central America for the rumba. At the end of the concert he thanked the audience for having been present while the band “searched for these deep places in the music”. Believe me, they found them. (LONDON JAZZ NEWS)

Eduardo Niebla, flamenco jazz guitar virtuoso and composer, has been trailblazing his exhilarating flamenco jazz fusion for over 40 years, collaborating with George Michael, Craig David and Juno Reactor as well as some of the top world music, jazz and classical artists of today.

The programme is a snapshot of Eduardo’s international life; a passionate journey from his early years in Morocco, to his impoverished flamenco roots in Spain and his discovery of jazz and the freedom of improvisation. inspired by Eduardo’s tours there and reveal a profound inner spirit and this, together with a sense of poignancy, pervades all Eduardo’s compositions.

Eduardo is a guitar maestro, of flamenco, gypsy, jazz and world music, and this has enabled him to fly, musically speaking. You only have to see this guitarist live, or listen to any of his 23 albums to date, to know that you’ve witnessed a formidable virtuoso and composer.

Over the years Eduardo has collaborated with an eclectic mix of artists on the international stage including Indian sitar virtuoso Nishat Khan, jazz saxophonist Lol Coxhill, Palestinian oud player Adel Salameh, the Dante String Quartet and gypsies from the desert in Rajasthan.

Eduardo said: “I always been trying to find those deep places in my music and notes that you never thought were in there. In this world of changing times for me the power of music to connect us all in harmony is a wonderful thing and a real possibility.”

“The versatility with which he imbues his guitar is truly breathtaking, whether performing his poignantly poetic melodies or accompanying a truly fabulous transcontinental performance” (SCOTSMAN)

“A display of supernatural talent….and a spellbinding mixture of flamenco and modern jazz, bursting with obvious passion & verve.” (THE SPECTATOR)

“And Eduardo – virtuoso? Inventive improviser? Yes and yes. He cast a deep, engrossing spell over the audience which transported them to other places.” (LONDON JAZZ NEWS)